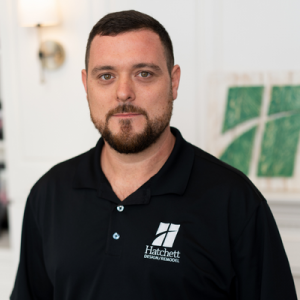 Clark is a native of Hampton Roads. He spent his early years in Norfolk’s Colonial Place. When he was 14, his family relocated to Poquoson, and he graduated from Poquoson High School. Clark continued his education at Ferrum college where he played football as a fullback.

After college, he realized construction was his stronghold, so he started a career in residential construction. He made a big move to Texas where he started working as a home builder, and soon he transitioned into custom home building.

After Clark and his wife, Moriah, had their first child in Texas, they decided to move back to Virginia. They are raising their young family, three children, and a dog, in Seaford.
We sure are glad Clark came back to Hampton Roads, and we are grateful to have him as a Project Manager.